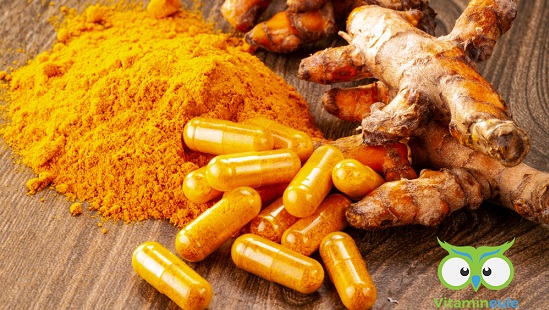 2. curcumin has only a low bioavailability

5. curcuma in the gastrointestinal tract

6. curcuma as an aid to weight loss

One: What is curcuma?

Turmeric, also known as curcuma, is a tropical mountain plant. The Latin name is curcuma longa. It belongs to the ginger family, but does not taste as hot as ginger, but rather mildly spicy and slightly bitter. It grows in Southeast Asia and India and grows to about one meter high. Like ginger, curcuma forms tuber-like parts called rhizomes. Curcuma contains the plant substance curcumin, which gives the plant its yellow-orange colour. This is why curcuma is also known as yellow ginger or saffron root. The ingredient curcumin has antioxidative and anti-inflammatory properties. Today, curcuma is mainly cultivated on the Indian subcontinent, in China, Indonesia and the South American tropics. The plant is used both as a spice and as a food supplement in the form of curcuma capsules.

2. curcumin has a low bioavailability

Curcuma has been known worldwide for many centuries. Curcuma has become a staple food in Asia because it can be used in many ways in the kitchen. Many people sprinkle the yellow powder over their food or use it to prepare a drink. However, curcuma contains only a small amount of curcumin, about 2-5%. Furthermore, curcumin is water-soluble and is therefore difficult to absorb in an aqueous environment in the intestine. About 90% is therefore excreted by the body. This means that one would have to eat huge amounts of curcuma to really achieve a positive health effect. For this reason, curcuma should be taken in the form of food supplements in order to benefit from the positive effects of curcuma.

Curcuma is offered in the form of capsules and tablets. Naturally, curcuma is also sold as powder. These forms are easy to handle and get into circulation quickly. However, curcuma tablets are sold in pharmacies, which in many cases have been manufactured with artificial additives or abroad. Curcuma capsules often contain only the active ingredient in a vegetable cellulose shell and can therefore be produced without fillers. In general, it should always be ensured that the product has been produced in Germany in order to guarantee a consistently high preparation quality.

Main ingredients of turmeric are the curcuminoids. These are secondary plant substances that consist of three components: Curcumin, demethoxycurcumin and bisdemethoxycurcumin. Curcumin - or curcumin as it is also called - is known under the food additive number E100 as a colouring agent and spice. The plant owes its typical yellow colouring to it. Even high-dose curcuma capsules have a strong, natural yellow colour. According to various studies, curcumin has, among other things, an anti-cancer (anticarcinogenic), neuroprotective, antioxidant, analgesic or laxative and anti-inflammatory effect and is used as a natural remedy in traditional medicine. Curcuma, also written turmeric, produces curcumin as an active ingredient for self-protection against predators. This is a powerful survival strategy for plants that grow up under extreme conditions. Curcuma also contains valuable essential oils that have an antibacterial effect. Curcuma capsules are often taken as they are said to have an antioxidant effect.

5. curcuma in the gastrointestinal tract

The yellow root bulb can help very well with digestive disorders. It is usually administered in the form of curcuma capsules. Curcuma can have a supporting effect on human digestion, as it stimulates the production of bile acid. The extract binds to fat molecules in food and helps to process them in the gastrointestinal tract. This helps to make meals more digestible. Digestive problems can also be remedied. Curcuma generally prevents flatulence, bloating and other gastrointestinal problems. 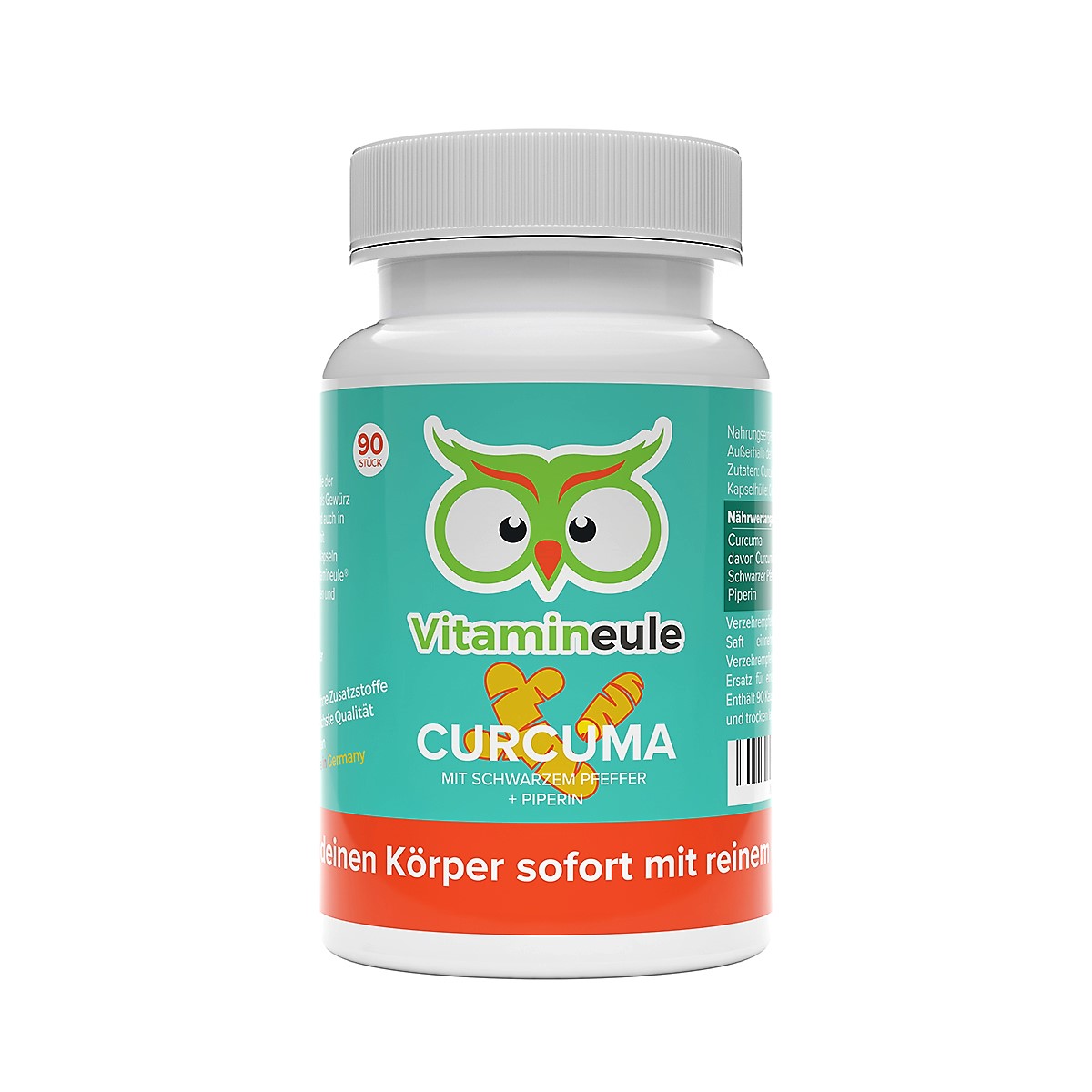 In our online shop you will find our Curcuma capsules from Vitamineule®, which are completely free of artificial additives. Our Vitamin Owl ® Curcuma capsules contain a total of 500 mg of pure curcuma per capsule. They also contain black pepper and piperine, which significantly increase the bioavailability of curcumin. Each can contains 90 capsules. In addition to fast & free shipping, we offer a voluntary six month return guarantee for all products.

6. curcuma as an aid to weight loss

Curcumin can help with weight loss because it stimulates the metabolism. The active ingredient stimulates bile production, which is essential for the digestion of fat. Curcumin increases the production of gastric juice, which speeds up digestion and can counteract a feeling of fullness. On the other hand, the food passes through the intestines faster and is excreted more quickly. Curcumin can also make the build-up of fat cells more difficult. Therefore fat pads need longer to form. In addition, curcumin hinders the synthesis of fatty acids and can also completely destroy fat cells. The bitter substances contained in curcuma are helpful for losing weight. The bitter substances ensure that a feeling of satiety sets in more quickly and you no longer get ravenous appetite attacks.

7. curcuma for lowering the cholesterol level

Curcuma is a natural remedy that can be used to lower cholesterol levels. Cholesterol is an essential substance for life. Among other things, it is essential for the stabilisation of the cell walls. In the case of chronic diseases, poor nutrition, too much alcohol and excessive consumption of animal fats, the cholesterol level can rise sharply. Too high a cholesterol level can lead to a heart attack, stroke and arteriosclerosis. During this process the cholesterol accumulates in the blood vessels and constricts them. Curcuma can help to lower this value, as curcumin has an antioxidant effect. It has anti-inflammatory and antiglycosic effects.

Curcuma is a tropical mountain plant. It belongs to the ginger family. For many thousands of years it has been well known for its healing properties in Asia. It is also very popular in the kitchen for seasoning and refining. The ingredient of curcuma is called curcumin. This has antioxidant and anti-inflammatory properties. Curcuma is referred to by many as a remedy because it can help lower cholesterol levels. It helps to lose weight and can be taken very well for digestive problems. Since curcuma has a low bioavailability and therefore a lot of curcuma is lost in the intestines, one would have to consume large amounts of curcuma to benefit from the positive effects of curcuma. Therefore, it makes sense to consume curcuma in the form of food supplements. These are offered in the form of curcuma powder, curcuma tablets and curcuma capsules.